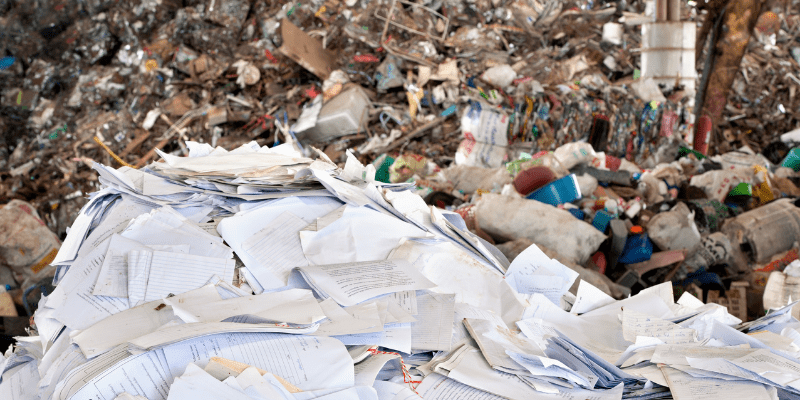 A long way from the antiquated “holes in the ground”, today’s landfills are highly engineered waste repositories with extensive liner systems, leachate and gas collection systems and more. Among the important facets of modern landfills, the gas collection system plays a valuable role in capturing landfill gas before it can enter the atmosphere. This collected gas can then be converted into energy, helping to dispel assumptions that landfills are the antithesis of sustainability.

As waste decomposes, it releases various types of gas, predominately methane and carbon dioxide. Decomposition of the waste plays a huge role in the amount of gas that is able to be captured. A number of materials, such as food waste and other organics, degrade rapidly, allowing for capture of the landfill gas. On the other hand, materials which do not degrade rapidly in a landfill often contribute to greenhouse gas emissions because there comes a point when it is no longer feasible to continue collecting the gas.

A LOOK AT BACTERIA AND ENZYMES TO INCREASE DEGRADATION

A recent study conducted by former EREF Scholar Dr. Muaaz Wright-Syed and Cardiff University, specifically investigated options for breaking down lignocellulose-rich waste (e.g. newspaper and wood), which does not degrade quickly leading to gas emissions. Fortunately, there are certain microorganisms that break down the lignocellulose – predominately white-rot fungi and some bacteria.

Researchers found that they could pull the enzymes responsible for breaking down waste out of the white-rot fungi and decided to use these enzymes and the bacteria that has been proven to break down lignocellulose as part of their study.

In an effort to circulate these enzymes and bacteria throughout the waste so they can do their job, they are combined with leachate, which is then sprayed on top of the waste or pumped into the landfill through holes drilled through the waste.

The study also investigated practical application and how the composition of the waste in a landfill affected the flow of the augmented leachate through waste. While previous studies of this lignocellulose degradation have shown success, they have been conducted in controlled environments and adapting these systems to real world conditions has proven less effective. One of the biggest issues with the practical application of these systems is the heterogeneous makeup of the waste in landfills. Waste composition in studies has been homogeneous, making it easier for the leachate and the bacteria to travel throughout the entirety of the waste.

THE RESULTS AND THEIR REAL-WORLD IMPLICATIONS

Results from this study indicate that the bacteria were able to break down all lignocellulose-containing material tested, while the enzymes degraded all material except wood.

In practical application, researchers submit that in landfill cells with homogeneous waste composition, the bacteria has the potential to enhance gas production and therefore greater energy production. However, in cases of landfill cells with heterogeneous waste composition, researchers suggest mechanical pre-treatment, or homogenization of the waste prior to building landfill cells. Lastly, the work may also have implications for stabilizing organics left in the landfill after closure as a post-closure.